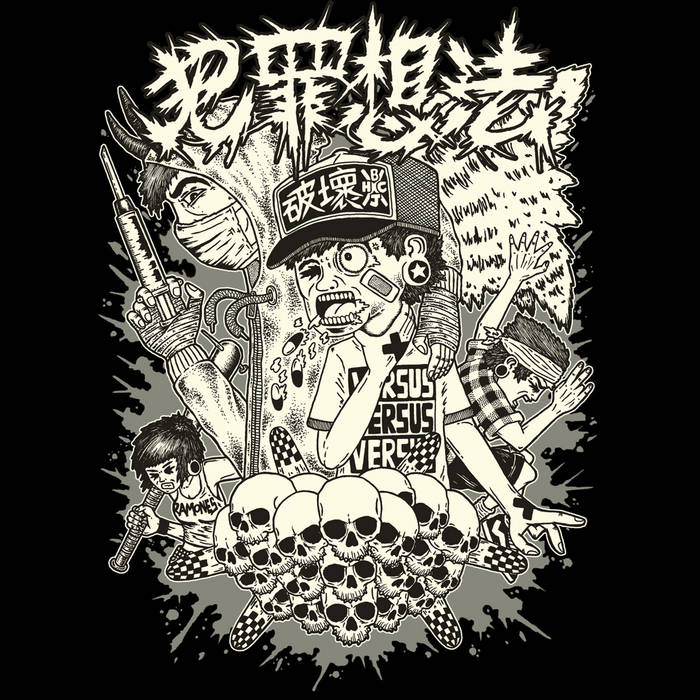 Coming at ya fast & heavy from Beijing (via Wuhan, Umea, Bonn, wherever else): FANZUI XIANGFA. First of all: you have to respect the grind (literally) of a band whose eight-year discography spins from start to finish in 35 minutes. That’s a lot of months per one-minute track. Recommended for fans of: late ‘80s American hardcore, very fast tempos, RIGHTEOUS FURY. Multinational corporations, racism, nuclear proliferation, the state apparatus, fitting in… these guys hate it all! I’m pretty mellow but these four have a knack for rekindling the angry fires of my youth. I can’t listen to this discography while walking down the street without sorta moshing and non-verbally daring everyone I see to confront me for being me so I can “Use [My] Fists” (gotta keep a lid on it though, ‘cause I’d lose). I swear I’ve listened to “I Am Not Like You!” so many times, my brain has blisters that will never heal. In a country just now getting into the whole mindless consumerism trip (and on a much, much more massive scale than ever before in human history), FZXF has been one of the loudest voices to say, “Fuck You”, “Fuck Your Flag!”, “Kill Your Television” and — here’s the real lesson, kids — “Destroy!”

FANZUI XIANGFA: polluting the Red Dream from within since 2006 with an alternative nightmare blacker than the guitarist’s t-shirt collection. Keep raging, boys. The New China and its smiling criminal minds are far too kind.

Additional guitar and bass by Kuang Ma and Huo Likao. Backing vocals by Jan Hansson, Mark and Fanzui Xiangfa. Recorded, mixed and mastered by Huo Likao at Jishengchong Studio in the summer and fall 2009.

All music and lyrics by Fanzui Xiangfa.
Discography LP mastered by Fredrik Lyxzen.
Artwork by 猴子xvx

Thanks to: Fredrik, Hou Likao, Glenn, Bibi, Rico, SS20, Daighila, Bad Nerve, D-22, Mark, Alice, our friends and families, Genjing Records and all the other labels that have released us, everyone that has helped and supported us along the way and our previous singers Hou Nao and Sha Dan. Tack som fan! 真他妈的谢谢!

Bandcamp Daily  your guide to the world of Bandcamp

cktrl talks about heartbreak and his new record 'Robyn'